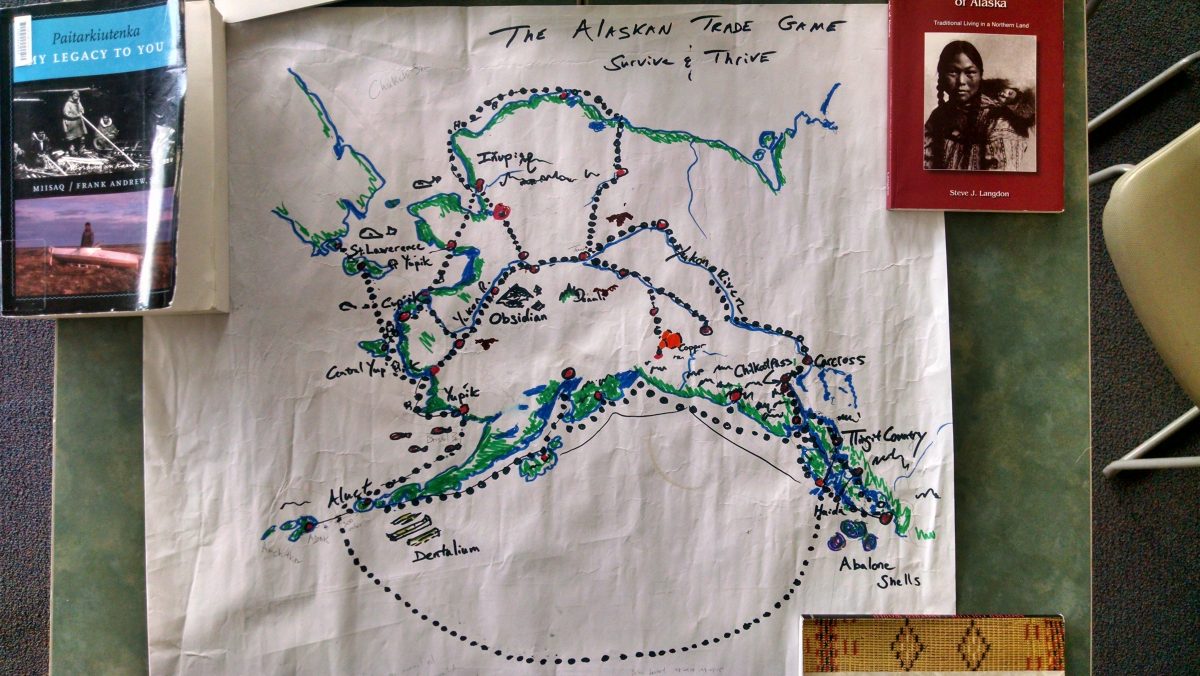 Evolution of an Idea 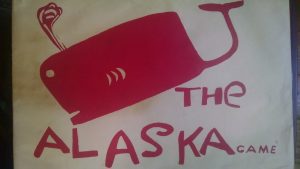 I batted around the idea of making this a map building exercise where kids when create a poster of how they would get somewhere to acquire a given good. It was suggested that it could be turned into a game with a board, rules and such. I debated whether I should take the leap of developing guidelines, rules, a board and what not. I mentioned to my mom that I was thinking about maybe creating a board game as a lesson plan. She quickly dug out a rather large envelope with big red print that read: the ALASKA game which was created by Capital School back in 1972. It looked like a fun project and you could see the children’s input clearly in the action cards. With the Alaska game as a rough blue print to s 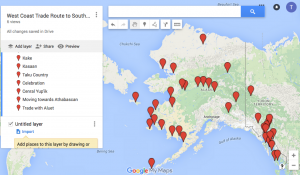 tructure my game, I literally traced the outline of the game board onto my own poster board and began tinkering and playing with my map. I also made a MyMap to help guide me and future players.

Culturally-knowledgeable students demonstrate an awareness and appreciation of the relationships and processes of interaction of all elements in the world around them.

The traditional values that are at the root of the gameplay are inspired from a traditional Yup’ik tall called “The Eye of the Needle” found in Father Michael Olesksa’s book Another Culture/Another World. In the story, a maurluq (grandmother) sends her tutgarluq(grandson) out on his first hunt. She asks him to return as soon as he has his first animal. Like many Yup’ik stories, the boy does not listen to his grandma and problems begin to mount. In the end, Maurluq saves the boy who has been transformed into a grotesque giant. A central message of the story– to listen to your elders with respect, share all food no matter how little, and respect the animals that have given themselves to you- became a key aspect to the game play and helped shape the rules and theme to the game itself. For example, players must make sure they reserve 2/3 of their catch for Maurluq and keep 1/3 for trading later in the game. Follow link below to view the full list of rules:

I have slowly started to incorporate the Yup’ik language.  In the rule book, I reference Maurluq as grandma once, then continue to refer to her in Yup’ik. Keeping words alive through use on an everyday level is key to building solid Cultural Standards. We should not simplify with translations back to English every time a Yup’ik word is seen. I have set the game in pre-contact Alaska to focus on the trade routes that the indigenous people created. After all, English was not spoken anywhere in the world for much of the time period this game takes place. 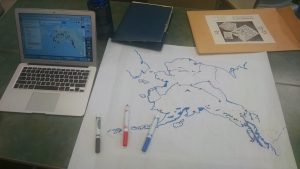 The process of this lesson plan has been very exciting. While sharing my lesson plan with a few cohorts, they have made some very interesting suggestions for future versions of this game that could also be linked to different lessons. The possibilities are vast. I also asked a team member to play an early version of the game to see how it would flow. The work in progress approach helped structure the game after just a few hands. We had a few rounds gathering resources on the hunt and slowly exploring the map. On his last roll, he decided to visit his father’s visit because he missed him. The game should retain some of this loose structure where players are traversing over the country and exploring waterways of their choosing. And though it does take place potentially thousands of years ago, I did not get bogged down with the details of images I used in MyMaps. 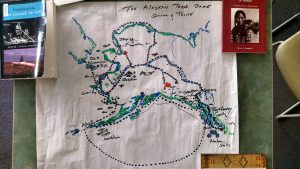 Part of the game, is seeing how it evolves. As a lesson, where can we see our class go with this? What would the group like to add that was missing?  What time periods can we incorporate to bring to light an ever-changing cultural landscape? What resources were not included that should be? Who knows perhaps as a class they could create the next big role playing board/game or online gaming craze? Looking back at the Capital School’s big “the Alaska Game”, I see that it is more than possible.